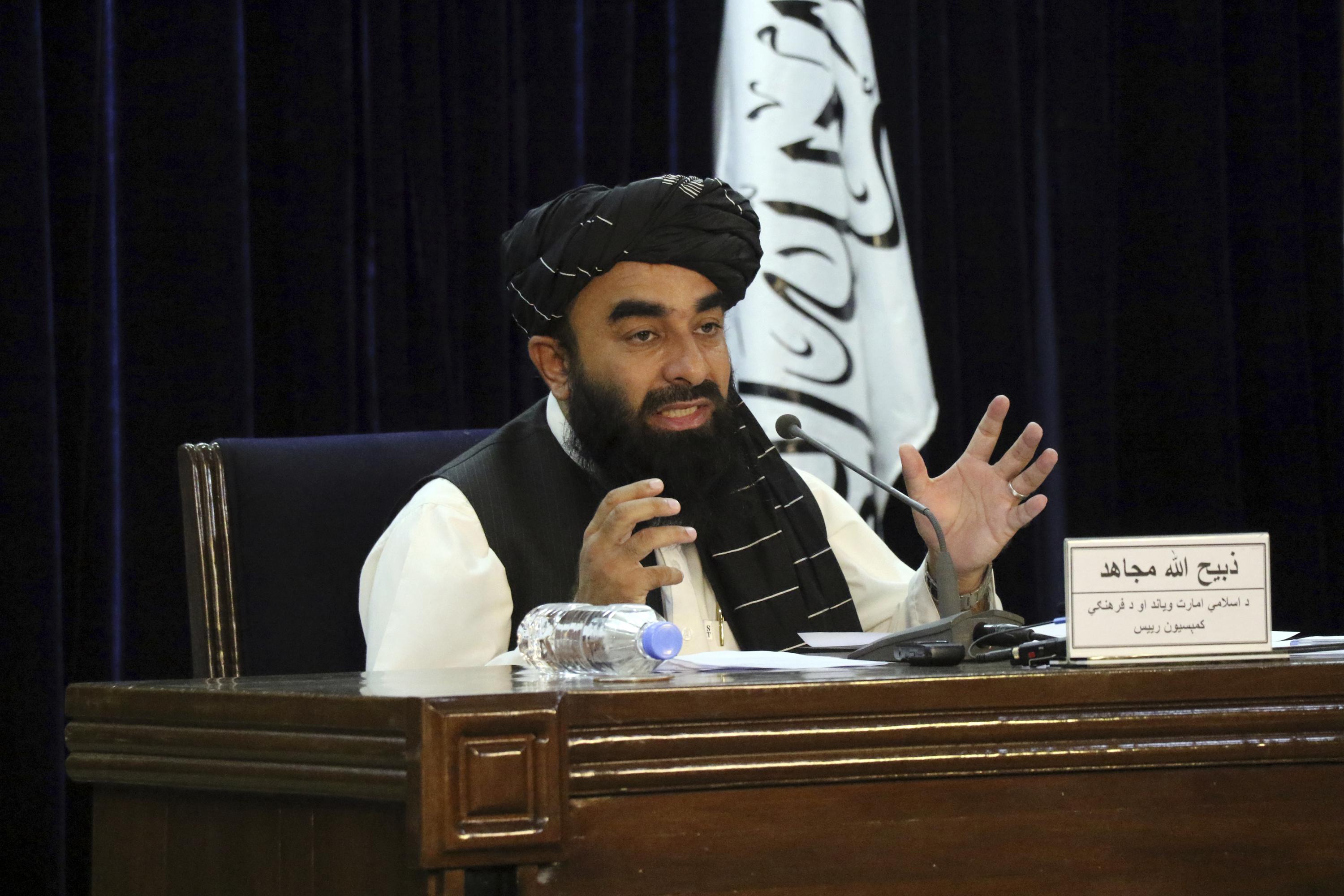 KABUL, Afghanistan (AP) — The Taliban on Tuesday announced an all-male interim government for Afghanistan stacked with veterans of their hard-line rule from the 1990s and the 20-year battle against the U.S.-led coalition, a move that seems unlikely to win the international support the new leaders desperately need to avoid an economic meltdown.

Appointed to the key post of interior minister was Sirajuddin Haqqani, who is on the FBI’s most-wanted list with a $5 million bounty on his head and is believed to still be holding at least one American hostage. He headed the feared Haqqani network that is blamed for many deadly attacks and kidnappings.

The announcement came hours after Taliban fired their guns into the air to disperse protesters in the capital of Kabul and arrested several journalists, the second time in less than a week that heavy-handed tactics were used to break up a demonstration.

Drawn mostly from Afghanistan’s dominant Pashtun ethnic group, the Cabinet’s lack of representation from other ethnic groups also seems certain to hobble its support from abroad.

As much as 80% of Afghanistan’s budget comes from the international community, and a long-running economic crisis has worsened in recent months. Near daily flights from Qatar bring in humanitarian aid, but the needs are massive, and the Taliban can hardly afford isolation.

In announcing the Cabinet, Taliban spokesman Zabihullah Mujahid emphasized that the appointments were temporary. He did not say how long they would serve and what would be the catalyst for a change.

Since taking over Afghanistan in mid-August after U.S. troops withdrew, the Taliban have shown no indications they will hold elections.

The U.S. State Department in a statement expressed concern that the Cabinet included only Taliban, no women and personalities with a troubling track record, but said the new administration would be judged by its actions. The carefully worded statement noted the Cabinet was interim, but said the Taliban would be held to their promise to give safe passage to both foreign nationals and Afghans, with proper travel documents, and ensure Afghan soil would not be used as to harm another.

“The world is watching closely,” the statement said.

The interim prime minister, Mullah Hasan Akhund, also headed the Taliban government in Kabul during the last years of its rule. Mullah Abdul Ghani Baradar, who had led talks with the U.S. and signed the deal that led to the withdrawal, will be one of two deputies to Akhund.

A policy statement accompanying the Cabinet announcement sought to allay fears of Afghanistan’s neighbors and the rest of the world, but was unlikely to calm the fears of women, who didn’t get a single post.

“Our message to our neighbors, the region and the world is that Afghanistan’s soil will not be used against the security of any other country,” the statement said.

It urged foreign diplomats, embassies, consulates and humanitarian organizations to return to Afghanistan. “Their presence is the need of our country,” it said.

The statement spoke of protecting the rights of minorities and the underprivileged, and it promised education “to all countrymen within the framework of Sharia.” Women were not mentioned in the three-page statement.

Abdul Salam Hanafi, an ethnic Uzbek, was named as second deputy to Hasan Akhund. A long-time Taliban member, he is unlikely to satisfy demands for inclusivity and minority representation.

Besides Haqqani as head of the police, the other top security post of defense minister went to Mullah Mohammad Yaqoob , the son of Taliban founder and near mythic figure Mullah Mohammad Omar.

The Haqqani network, which dominates most of eastern Afghanistan, has been blamed for dramatic attacks in Kabul in the past two decades and for orchestrating kidnappings, often of Americans. Washington believes it still holds Mark Frerichs, a civilian contractor, who was abducted in January 2020 and hasn’t been heard from since.

The new foreign minister will be Amir Khan Muttaqi, another prominent figure from the Taliban’s last time in power. He faces a difficult task, given the Cabinet’s lack of diversity.

The Cabinet selection defied the many voices that had urged inclusivity and moderation. Instead, it seemed to be a bow to the Taliban’s tens of thousands of fighters, who would have struggled to accept figures from previous governments that they see as corrupt and that they believe they were called upon to oust.

“The fighters made the sacrifices. ... They are the decision makers, not the politicians,” said analyst and author Fazelminallah Qazizai, who has has written extensively about the Taliban.

Yet even with a Cabinet dominated by ethnic Pashtuns, the Taliban’s fighting force would appear to have already attained some diversity, with their ranks bolstered considerably by ethnic Tajiks and Uzbeks. That may have helped hand the Taliban a surprising win in the mostly Tajik province of Badakhshan, which they overran with hardly a fight. When they last ruled, the province was the only one they failed to control.

At Tuesday’s demonstration that was broken up by gunfire, protesters had gathered outside the Pakistani Embassy to accuse Islamabad of aiding the Taliban’s assault on northern Panjshir province. The Taliban said Monday they seized the province — the last one not in their control — after their lightning advance through Afghanistan last month.

Dozens of women were among the protesters, and some carried signs bemoaning the killing of their sons by Taliban fighters that they say were aided by Pakistan. One sign read: “I am a mother. When you kill my son, you kill a part of me.”

At one point, a Taliban fighter responded: “We have announced amnesty to everyone who has killed our sons.”

The Taliban moved quickly and harshly to end the protest as demonstrators arrived near the presidential palace. They fired their weapons into the air and arrested several journalists covering the demonstration. At one point, a Taliban member waving a Kalashnikov rifle took a microphone from a journalist and began beating him with it. The journalist was later handcuffed and detained for several hours.

“This is the third time I have been beaten by the Taliban covering protests,” the journalist told The Associated Press, speaking on condition he not be identified because he feared retaliation. “I won’t go again to cover a demonstration. It’s too difficult for me.”

A journalist from Afghanistan’s popular TOLO News was detained for three hours by the Taliban before being freed. He was given back his equipment and his video of the demonstration was intact.

On Saturday, Taliban special forces in camouflage fired their weapons into the air to end a protest march in Kabul by women demanding equal rights.

This news comes from: AP NEWS

About the author: from the network: admin

Share the latest news from all over the world！

How major US stock indexes fared